Human embryology is the study of the development of an embryo that occurs during first eight weeks after fertilization.

It is the time from fertilization through the development of the early embryo until implantation is completed in the uterus. It takes around 10 days.

The zygote divides mitotically.
Blastomeres are the undifferentiated dividing cells, that aggregate into a sphere enclosed within the membrane of the ovum.
Gap junctions develop.
16 celled stage is the Morula.
Development is holoblastic. 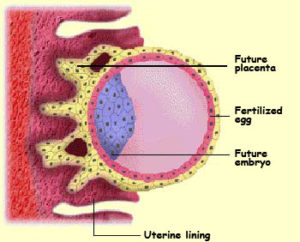 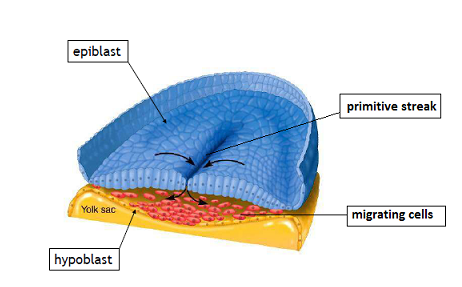 Gastrulation occurs by invagination of the epiblast. The primitive streak formed by migrating epiblast marks the beginning of gastrulation. It establishes the head & tail ends of an embryo.
• Gastrulation occurs 16 days after fertilization.
• It reorganizes to form 3 layered embryo.
The three germ layers are the ectoderm, mesoderm & endoderm, and are formed as three overlapping flat discs.
• Ectoderm will give rise to the outermost layer of skin, central and peripheral nervous system, eyes, inner ear, and many connective tissues.
• Mesoderm will give rise to the heart and the beginning of the circulatory system, as well as the bones, muscles & kidney.
• Endoderm will serve as the starting point for the development of the lungs, intestine, thyroid, pancreas & bladder.
Developing in front of the primitive streak is a primitive node, which is the organizer of neurulation. It arises from epiblast and induces the formation of the neural plate.

Development of organs starts during the 3rd to 8th week.
• The heart is the first functional organ to develop and starts to beat and pump blood at around 21 days.
• In the fourth week, limb development begins.
• From the third to the eighth week the face & neck develop.